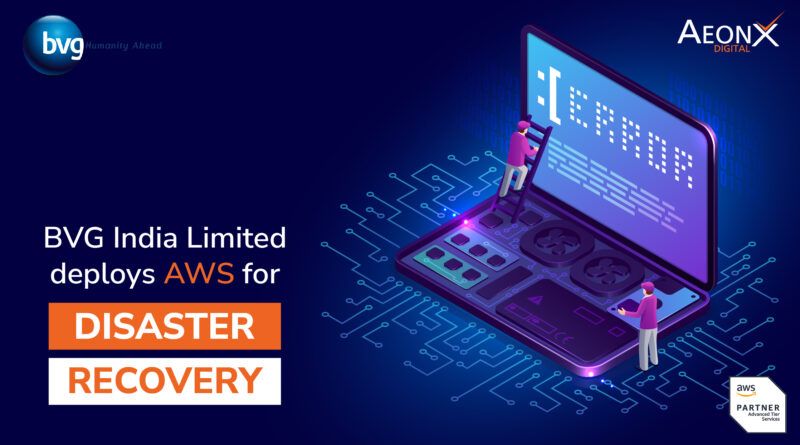 BVG India Limited, founded in 1997 by Mr. Hanmantrao Gaikwad, is a responsible and forward-thinking company that seeks to support India’s entire development. By 2030, the BVG group hopes to make a positive difference in the lives of ten million people through empowerment, employment, and education.

BVG’s Disaster Recovery(DR) system was on the verge of failure. For disaster recovery, they used on-site infrastructure servers, which lacked the flexibility they would have needed. As a result, they lost all of their data. To overhaul its DR solution and fulfil the company’s larger goal of migration to the cloud, BVG turned to AeonX.

BVG’s focus on customer service has fuelled a rapid level of growth since its launch around three decades ago. BVG’s DR testing and drills revealed the following issues with its existing infrastructure:

Furthermore, it had limited assistance for technology testing and development and its systems were not as adaptable as they would have desired. Additionally, the company lacked a comprehensive business continuity and disaster recovery(DR) plan and required a technology infrastructure that could meet demand while also fostering additional expansion.

In search of reliability and automation

By working through the night through its 24/7 delivery centre, AeonX came up with a solution to fix the production server. It was accomplished by proposing the following structural changes:

Additionally, it postponed a sizable planned capital expenditure to upgrade the hardware in its DR data centre and instead redirected that money to cover the operational costs of maintaining DR in the cloud.

BVG India Limited, founded in 1997 by Mr. Hanmantrao Gaikwad, is a responsible and forward-thinking company that seeks to support